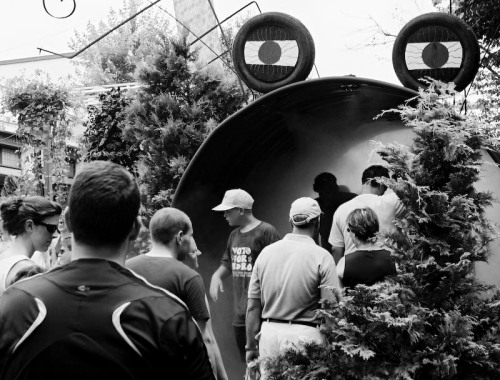 Following the evolution of my photography brings us to the transition step, C-41 black and white. While working in a remote (by my standards) central Pennsylvania location, I scored a lens I wanted from eBay that happened to be attached to a 35mm manual SLR. In order to fully assess my purchase and leave all-important feedback, I decided to head to Wal-Mart to pick up a roll of film or three. It was here that I discovered C-41 black and white: black and white film that can be processed at any lab that does regular color film (development of true black and white film is extinct save for a few high-end labs and home processing). The film at Wal-Mart is Kodak 400CN, and I shot the better part of two rolls at Penn State’s Artsfest this summer. While this shot is really not a favorite of anyone who frequents my photography, I like it, which I suppose is probably the point.

For those who are into the technical side, I was impressed with the smooth tones and low grain of this film shot at 400. The image you see here is a mildly Lightroom-corrected Wal-Mart scan (definitely more coming about various scanning services I’ve paid for) of the negative. I guess the moral of the story is that C-41 black and white (a) exists and (b) can produce impressive results with a simple shoot-dump at local big box/camera chain/drugstore-enjoy process. Definitely worth a try for 35mm shooters who don’t want to take the plunge into self-developed black and white.

The verdict: C-41 black and white was fun, convenient, and produced impressive results, but it was not without drawbacks. For me, the biggest drawback was price: Three rolls of 24-exposure 400CN runs about $12 at Wal-Mart, and when you add in about $6 per roll for processing and an additional $2 to have the negatives scanned, it was about $12 per roll or $0.50 per frame. While that’s very inexpensive compared to shooting 4 x 5 or 35mm slide film, it’s still pretty rich for my student blood. Additionally, the C-41 process offers very limited control over output. While I physically exposed the frames in my camera, whoever did the development had complete control over the processing of the negatives and the corrections applied to the prints. When you consider the fact that the “whoever” in question is a machine designed to produce the most acceptable color prints for the Wal-Mart crowd, the situation isn’t exactly ideal. All things considered, C-41 black and white films like 400CN or Ilford XP-2 are great for those who need convenience (on the road?) or want to get a taste of 35mm black and white, but I was not completely satisfied.

This is one of many street shots from ArtsFest I shot on Kodak 400CN with my Ricoh manual SLR and 50mm Asahi SMC lens. The brightness of the day and the fact that I wouldn’t receive my 49mm circular polarizer for another week conspired to limit me to smallish apertures, but in this case it the result is interesting (to me at least) with so much of the frame in focus. Lesson learned: When street shooting on a bright July day, 100 speed film and polarizers or neutral density filters are your friends.

Tomorrow: I progress to true old-fashioned handmade black and white.