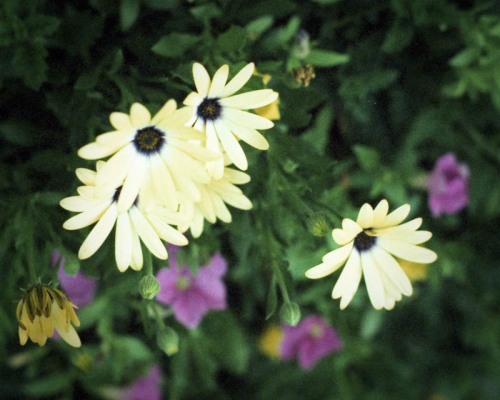 I need to do more shooting, and I think I’m going to try cross-processing more slide film. Among other things, I have some Provia 400F on my desk (expired September 2004) which should be interesting. This is from another roll of the same film. 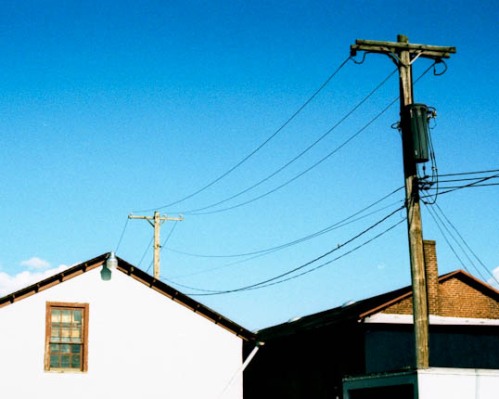 I think this is a nice example of what my cross-processed Provia is doing to skies. Pretty neat, isn’t it?

Another from my Provia roll this weekend. When I first ran these negatives through the scanner (I always check the “develop only” box now that I have a negative scanner, and Ritz still charges $4.50), I was disappointed. They had the graininess and sharpness that I like from my cross processed rolls, but the color shifts were minimal and the dynamic range was impossibly thin. I bracketed each shot, and in many cases one was underexposed and one had blown highlights all over. Is Provia a bad film for cross processing? A quick Flickr search suggested that this is definitely not the case.

So why did my film look funny? Turns out the automatic exposure software in my scanner doesn’t handle weird negatives very well (specifically the white point setting). Once I went back and set it manually, I got some very interesting results. Here’s one in color: 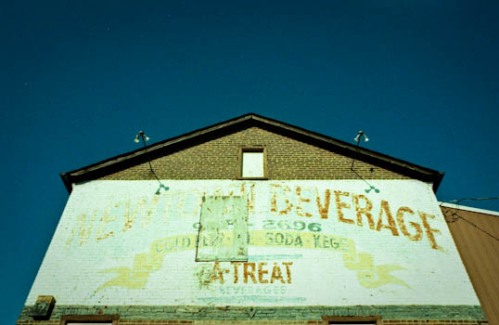 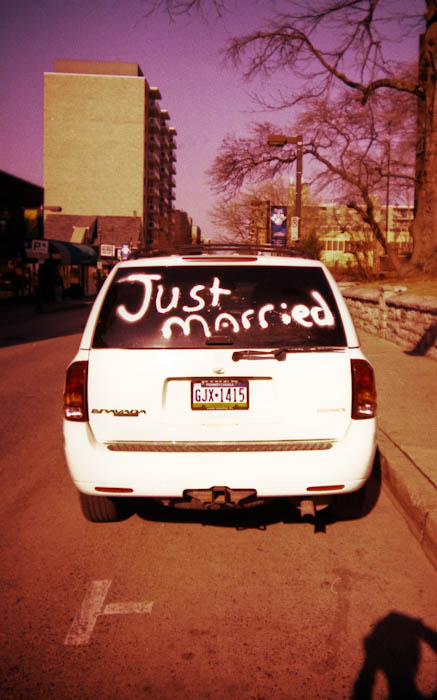 Am I lowering my standards?

After my repeated CVS developing disasters (preceded by my CVS scanning disasters), I’ve finally given up on CVS One-Hour Photo Processing. There’s something so incredibly convenient about having your negatives developed while you wait (they put a develop-only through in about twenty minutes), but when they are routinely destroying rolls of your film, it quickly becomes a problem. Now that I’m taking my film to the local professional shop, the dust and scratch problems have literally disappeared. While the jump from $2.19 to $3 per roll is really hurting my wallet, the real downside is waiting for my film to come back. They only run C-41 when enough piles up, which usually comes to about once a week. Last time I walked in literally ten minutes before they were running film and had my negatives back in twenty-five minutes. The next roll I dropped off has been there for five days, and will hopefully be done tomorrow. As a result, the blog has become a bit sporadic, and when a roll doesn’t work out (for example, because I’m shooting slide film I’ve never cross processed before in a camera with a lens I’ve (almost) never used before and another that I’d not only used before but cost $3.71), it can mean a dry week.

As is my usually style, I’ve been occasionally going back to these for a week. letting them grow on me and seeing if anything I really like emerges. Unfortunately, nothing did. I do think this is an interesting shot though (if just for the documentary value), and it’s also an interesting example of what happens when you cross process. These are the “natural” colors. This is not a Photoshop action or something of that nature (my post-processing consisted of a crop, a little highlight recovery, and a slight “s” in curves to boost contrast, along with the sharpening that is a necessity for every negative scan). Cross-processed films tend to turn either magenta or green to varying extents depending on the film used and the exposure, and this is an example of a strong magenta shift. You can also see how it varies across the tonal range: The highlights (the back of the SUV) have virtually no shift, the lights (brighter portions of the pavement and sky) have a minimal shift, and the darks (farther edges of the pavement and sky) have a strong shift toward magenta.

Also, note that I appear in the image. A decidedly postmodern nod in an otherwise pointless picture.

Fuji Sensia 100 shot in a Fuji Smart Shot II (which is ghetto beyond all imagining, and please be aware that the camera in that image is the “deluxe” model, which mine is not) cross-processed C-41 (and not ruined, but unfortunately also pretty uninteresting). 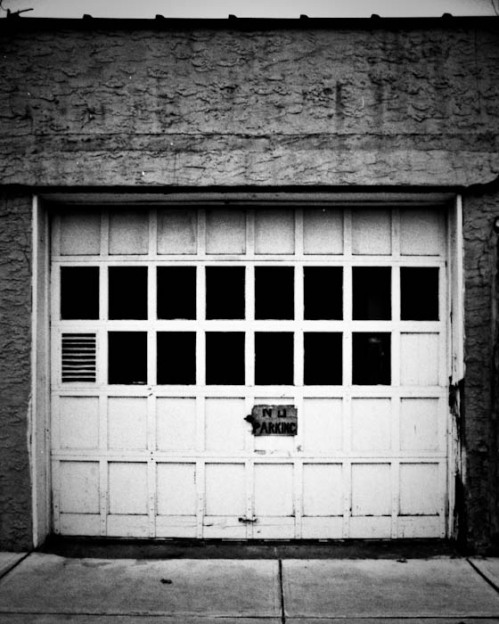 Two steps forward, one step back.

There is a color version of this that I almost posted instead. See it here.

My local camera shop (fittingly called “The Camera Shop”) only processes film about once a week, but when I walked in today they were getting ready to run some in less than ten minutes. I had it back less than half an hour later. The results make CVS look like, well, a drugstore, and it only cost me $3.

This image keeps bothering me. Somehow I feel like I like everything sbout it except the fact that there’s nothing interesting in it. It comes from a cross-processed roll of Sensia that I shot the beginning of in Trenton in my XD5 last week and finished in a little Fuji point and shoot camera this afternoon. Sadly, the results weren’t exactly what I was hoping for (actually, the $3.71 Fuji camera was the one that produced the technically better images, which is maddening). After a miserable runaround with an eBay seller over a camera with a broken light meter (apparently the absence of “I promise this works” in the item description means “sold as-is”), I gave up and told myself at least I’d gotten a few lenses from the deal. Unfortunately, the 28mm Vivitar I was so excited about is so soft I briefly wondered if I missed the focus on every shot, and has vignetting that is brutal. In the future I guess I’ll try stopping down further, but I’m pretty disappointed. Oh well. No one said it’d be all sunshine and rainbows.

Authenticity III (or The Literal Other Side) 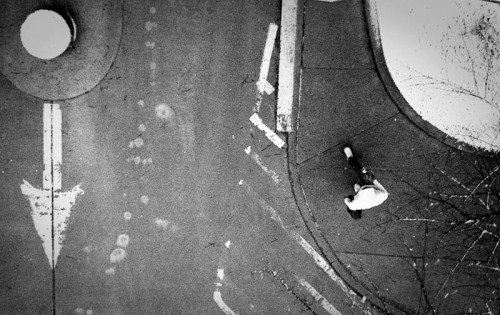 When I had scanned all of the negatives from my cross-processed slide roll (see here and here) and was looking at my virtual contact sheet in Lightroom, I noticed something strange: The same character appeared twice. Though it seemed completely illgocial, upon closer inspection there really is no denying that the subject of this photograph is the same one shown here (note the tight white sweatshirt, bouquet, and shoes- I couldn’t believe it myself at first). The first was shot through a plastic window as I climbed a flight of stairs on one side of a parking garage, and as I wandered around the roof shooting, this guy apparently made his way all the way around to the opopsite corner where I unknowingly caught him again.

So why isn’t this one color? The more I look at this roll, the more I like them procesed black and white. Part of me feels like that defeats the entire purpose of cross processing (usually done for the crazy color shifts, which I have yet to see), but it does keep the sharpness, graininess, and high contrast intact (in fact, these things might be more noticeable). Though at first I tired to convince myself that the color versions were “truer” to the form, I think I’ll go with what makes images I like better from now on. For most of these, it’s E-6 processed C-41, scanned, and digitally converted to black and white. If I’m happy with the result, what difference does it make how I got there (assuming, of course, that I didn’t steal the image from someone else and put my name on it or something of that nature).

Maybe I should just go back to digital. 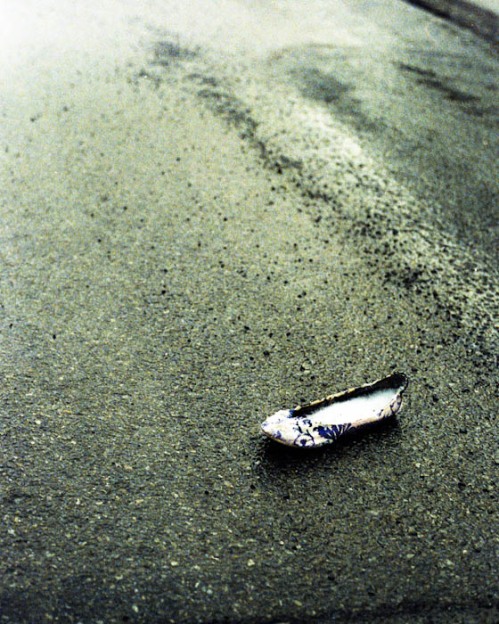 I’m pleased that I’m pleased with two of the images from my very first cross-processed roll. My expectations were low, but I am going to go get some more Elite Chrome tomorrow (the store was closed today). I think this is a nice contrast to yesterday’s Valentine’s image. Between the two, it seems like everyone should have something to identify with. This one was so sharp (with none applied in scanning) that I actually backed off the clarity a little in Lightroom. I have learned three things about cross processing E-6 film in C-41 chemicals: It’s unpredictable, it’s grainy, and it can be so sharp it makes my head hurt. My hypothesis: Bright sun and overexposure make the colors go crazy (more formal testing of that one will commence when I get more film). 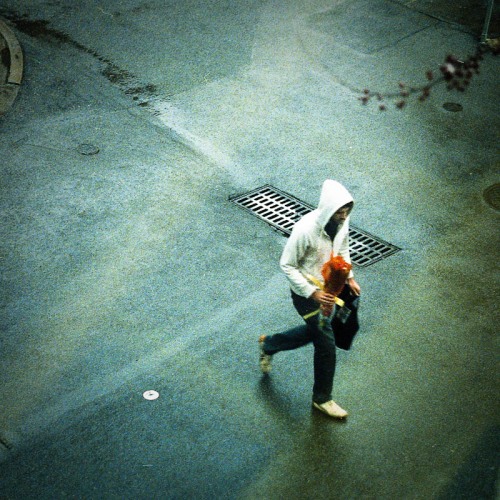 After finishing up a particularly long week on Friday, I stopped by the camera store in town to chat with the owners. They’ve been at photography longer than I’ve been living, so they have all sorts of interesting perspectives on various things photographic (especially vintage gear, which is all I have now that I’ve parted ways with my digital SLR). After talking to one of them for probably an hour, I asked about expired film and found that they had a gold mine. After attempting faux cross processing before, the prospect of expired Elite Chrome slide film was too exciting to turn down. I bought a roll, shot it the next day (yesterday), and had it developed at CVS that evening. Here are the results of my real live cross process: Grainy, ugly, tinted, and supersaturated. Hope your Valentine’s Days were as good as mine was.

Photography can be unexpected.

Not too long ago, I thought I had perfected the color film in black and white chemistry processs with my particular set of film and chemicals. Thrilled that I had finally worked out a foolproof formula, I shot and developed another roll. As soon as I took the negatives out of the tank, however, I knew something was wrong. They were darker and denser than the previous set, and the scans bore out my suspicions: Bad. However, one image of a mural in an alley over a doorway looked like it might be redeemable. I “redeemed” it by cropping out everything but the mural (which was the only thing even remotely close to correctly exposed). Here it is.

Fuji Superia 400 color film developed in Clayton F76+ black and white chemistry and shot in a Minolta XD5 with center-weighted metering, which I no longer trust. 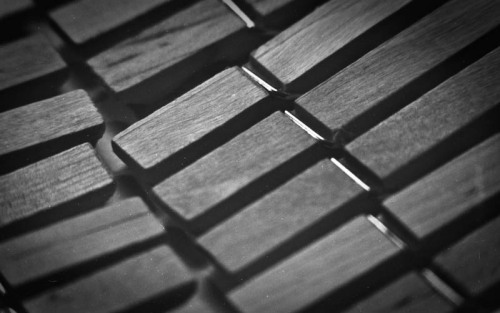 With access to a borrowed Minolta 35mm camera and some lenses, I couldn’t resist the urge to try out some macro work with the 80-200mm “macro” zoom (which, when combined with the included 2X teleconverter, got pretty close to macro without quotations). Some of the shots worked, some didn’t. I think this one came out quite nicely.

This is 35mm, but it isn’t black and white film. It wasn’t converted after scanning, either. It’s 400 ISO color film shot at 200 ISO (one stop overexposed) and developed in black and white chemistry. Why, you ask? That’s a good question. To be honest, I don’t really know either. Something about the challenge is enticing, and the results are unique. Something about it just works for me. This isn’t my first try with this technique (or my second), but  think I’ve found a process that produces usable negatives (my last roll was completely ruined by incorrect developing times, which is tough since you more or less have to determine them by trial and error).

Fuji Superia X-tra 400 shot at 200 in a Minolta XD5 with a third-party “macro” zoom and a 2X teleconverter, then developed in Clayton F76+.