As a somewhat dedicated lo-fi photographer (I think anyone who has shot a roll of film that cost more than the camera it went into deserves this designation), I have been jealously eying Holga shots for quite some time now. It just always seemed like a silly thing to spend money on, since I would need a new developing tank and 120 film to go with it. All of this changed last week when I accepted a job offer. It seemed like a good time to buy myself a present (especially one that was $19 with free shipping), and since all of my black and white chemistry has gone bad anyway, I bought C-41 process black and white film instead of the traditional stuff (so it can be processed anywhere, although most labs won’t do the 120 film the Holga uses, at least not in-house).

While anxiously awaiting my UPS package (apparently two day air means five days?), I read up on all sorts of Holga info. It seemed like everyone who has tried one has made some sort of silly mistake on his/her first roll, from loading the film wrong to leaving the lens cap on to exposing all of the film when the camera’s back fell off (which I couldn’t really imagine until I held one myself).

After my Holga finally arrived, I resolved not to make any of the silly mistakes I had read about, loaded a roll of XP2, and started shooting. Holgas can shoot in one of two formats: 6×6 or 6×4.5. 120 film has a paper backing with counting numbers in different locations which allow the photographer to advance the film the correct distance. Since the 6×6 images are 1.5cm wider, they require a little more winding between images (and thus only get 12 images to a roll instead of 645’s 16). When I had finished shooting my first roll, I tried to advance the film the rest of the way so I could take it out. As I kept turning the film advance, the numbers went way past 12 to 13, 14, and all the way to 16. I had left the counter set to 645, so all of my images overlapped into one continuous mess. I decided to have the film developed anyway, but I’m not expecting much from it. I guess we’ll see in a few days.

At least now I’ve made my official first Holga mistake. 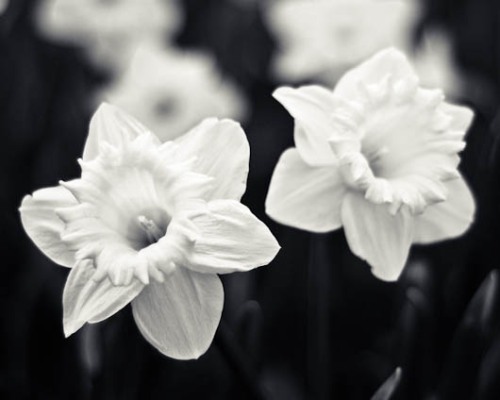 Does this count as “something different,” or is it still a photocliché?

One of the first things I shot with my 50mm f/1.8 was this collection of daffodils. Shot at f/1.8 and very close range, the depth of  field is almost nonexistent. While this is certainly a cliché, I tried to process it a little differently. Does it work?

My students developed their first rolls this week, with some success. Unfortunately, one of our cameras has serious meter problems and another has light leaks. This process has been a constant reminder of both how difficult and rewarding getting a working vintage setup can be.

Yes, it’s true, I haven’t been around for a while. It’s the end of the semester and life is hectic, so shooting has unfortunately been relegated to the back burner for now. However, with all of the new (well, okay, a lot of it is used) gear sitting around, I have plenty of motivation to go shoot once I can. I hate seeing my unused new camera sitting right under my left elbow while I spend the days (and nights) at my desk, but that’s the way it has to be for a little while.

On the other hand, steppng back from a creative medium can be a huge step toward getting refocused on the images you see in your head and how you want to make them. I am hoping to return to the viewfinder more relaxed and ambitious, and hopefully it will be reflected in my work. I have a lot of photographic goals for this summer, so I need to hit the ground running when I finish up on Saturday. Stick around- soon, this place will be flooded with new stuff. Until then, follow the people listed on the right, who are much more diligent than I.

I was referred to this video on Zack Arias’ page recently, and I was really floored. I’ve never really heard anyone talk about photography this way. If you have ever felt bad about anything related to your work, watch this video. If there’s a possibiltiy that you will ever feel this way, watch this video. If you don’t fall into either of those categories, you should probably watch it anyway.