Three in a row from my last Holga roll. This was the first roll I shot without the 6×6 mask, so there’s some nice bleedover onto the edges of the film. Interesting to note that the exposures are so different. The sun was going down, so hypothetically they should get darker from left to right. Since the Holga shutter mechanism is a disc with a hole and a spring, it’s not really surprising that these are all over the place.

I need to do more shooting, and I think I’m going to try cross-processing more slide film. Among other things, I have some Provia 400F on my desk (expired September 2004) which should be interesting. This is from another roll of the same film.

I think this is a nice example of what my cross-processed Provia is doing to skies. Pretty neat, isn’t it?

Another from my Provia roll this weekend. When I first ran these negatives through the scanner (I always check the “develop only” box now that I have a negative scanner, and Ritz still charges $4.50), I was disappointed. They had the graininess and sharpness that I like from my cross processed rolls, but the color shifts were minimal and the dynamic range was impossibly thin. I bracketed each shot, and in many cases one was underexposed and one had blown highlights all over. Is Provia a bad film for cross processing? A quick Flickr search suggested that this is definitely not the case.

So why did my film look funny? Turns out the automatic exposure software in my scanner doesn’t handle weird negatives very well (specifically the white point setting). Once I went back and set it manually, I got some very interesting results. Here’s one in color:

Look what I found.

Another old shot of an old truck, this one from some time around October when I was testing out my brand new (to me) K1000. I’m trying to get back to posting regularly, but it’s tough because none of the film I’ve been shooting is developed yet (a black and white roll and a roll of ancient cheap color film I found in my boss’s office). This isn’t one of my favorites, but it fits the theme.

Something about fields of flags always catches my eye

(and this one was no exception).

Redscale film is something I’d like to shoot more of in the future.

I think this is pretty self-explanatory.

The exciting news is not that the camera body got here today (which was expected), but that the lens and CompactFlash card arrived a full four days earlier than UPS predicted. That was definitely a nice Friday surprise. 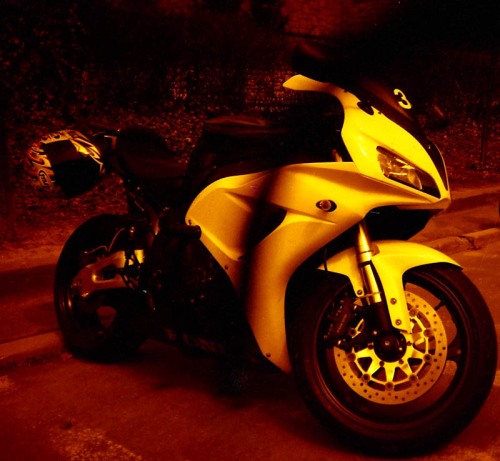 I shot another roll of redscaled film last week with much better results. Wide angle lenses (even if they are plastic and attached to a $3 camera) ar great for close-up perspective-disorting shots. I like how huge the (admittedly huge in real life) brake rotor looks. I had a dream last night that I bought some sort of used Triumph, and it reminded me that I wanted to post this.

Am I lowering my standards?

After my repeated CVS developing disasters (preceded by my CVS scanning disasters), I’ve finally given up on CVS One-Hour Photo Processing. There’s something so incredibly convenient about having your negatives developed while you wait (they put a develop-only through in about twenty minutes), but when they are routinely destroying rolls of your film, it quickly becomes a problem. Now that I’m taking my film to the local professional shop, the dust and scratch problems have literally disappeared. While the jump from $2.19 to $3 per roll is really hurting my wallet, the real downside is waiting for my film to come back. They only run C-41 when enough piles up, which usually comes to about once a week. Last time I walked in literally ten minutes before they were running film and had my negatives back in twenty-five minutes. The next roll I dropped off has been there for five days, and will hopefully be done tomorrow. As a result, the blog has become a bit sporadic, and when a roll doesn’t work out (for example, because I’m shooting slide film I’ve never cross processed before in a camera with a lens I’ve (almost) never used before and another that I’d not only used before but cost $3.71), it can mean a dry week.

As is my usually style, I’ve been occasionally going back to these for a week. letting them grow on me and seeing if anything I really like emerges. Unfortunately, nothing did. I do think this is an interesting shot though (if just for the documentary value), and it’s also an interesting example of what happens when you cross process. These are the “natural” colors. This is not a Photoshop action or something of that nature (my post-processing consisted of a crop, a little highlight recovery, and a slight “s” in curves to boost contrast, along with the sharpening that is a necessity for every negative scan). Cross-processed films tend to turn either magenta or green to varying extents depending on the film used and the exposure, and this is an example of a strong magenta shift. You can also see how it varies across the tonal range: The highlights (the back of the SUV) have virtually no shift, the lights (brighter portions of the pavement and sky) have a minimal shift, and the darks (farther edges of the pavement and sky) have a strong shift toward magenta.

Also, note that I appear in the image. A decidedly postmodern nod in an otherwise pointless picture.

Fuji Sensia 100 shot in a Fuji Smart Shot II (which is ghetto beyond all imagining, and please be aware that the camera in that image is the “deluxe” model, which mine is not) cross-processed C-41 (and not ruined, but unfortunately also pretty uninteresting).

The Other Side II

A few weeks ago, I was perusing my local camera shop, which is one of the few local “mom and pop” stores I actually feel obligated to support. This is because they actually provide services, information, and products that I would miss if they were gone. The film was closing in on a decade expired, and I thought it might be interesting to play with, The results were incredibly grainy, had unpredicatable color shifts (some warm, some cool), and ugly mottled patterns in the dark areas (light parts of the negatives). This is a black and white-processed image from a color negative scan from this roll. I always feel like I should disclose this, and sometimes I do. The color version, which I think is interesting considering the unique qualities of the film, is here. I like it, but I don’t think it has the same impact, and the coldness of the tones (causing the blue cast) was frustrating me.

So, where are the incredible Velvia desert shots from my backpacking trip (as referenced here)? Unfortunately, they don’t exist, and I don’t mean they aren’t developed yet. I was supposed to leave two Fridays ago, but I had been battling the flu all week. I woke up on Friday feeling worse than ever, and had to make the difficult decision to cancel my plane ticket based on doom and gloom predictions of possible sinus infections, chest constriction and/or breathing trouble, and pneumonia (none of which came to pass). Instead, I spent the week at home, which means no desert pictures. I did do a little shooting (some Sensia headed for C-41 processing and some expired 400CN black and white film in a toy camera I picked up for less than $4), but neither roll is quite finished yet.
In addition to avoiding death in the wilderness (I made a good choice, since it snowed the second day and was cold and windy for part of the week, which would have been miserable while battling a fever at 8,000 feet), I spent some of my week thinking about my photography in broader philosophical terms. In the last six months, I transitioned from a thoroughly modern digital photographer to a lo-fi obsessed cheap and bizarre camera toting weirdo, and I’m not quite sure why. I think I’m closer to being able to photo- (and culture-) philosophically define myself. A manifesto may appear here soon.

Konica VX100 expired while dinosaurs still roamed the earth (2000), shot in a “borrowed” Minolta XD5 with a tons-o-fun Vivitar 28mm lens that is significantly older than I am.